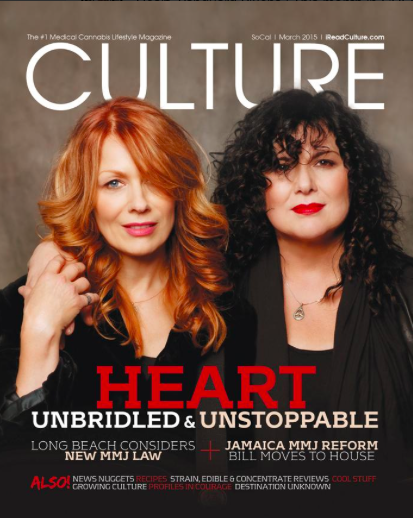 UPDATE 2/20: Ann Wilson recently posted a vintage picture of her with a joint to her Facebook page under the headline, "Here's to Friday."

Ann and Nancy Wilson, who with the band Heart made songs like "Crazy on You" and "Magic Man" rites of passage for my generation of women (and beyond), are Culture Magazine's latest cool coup interview for their March issue.

"We think it should be legal in every state in the country! It’s obviously less dangerous and harmful than alcohol, and it has many good uses for people, especially people who are very ill, but also for people who suffer from anxiety, insomnia, or pain of different types. It’s just strange to me that we’re still even talking about it."

Along with 20 million others, you've probably seen the video of the Wilsons' performance of "Stairway To Heaven" accompanied by full choir and orchestra at the 2012 Kennedy Center Honors. Sing it, sistas.