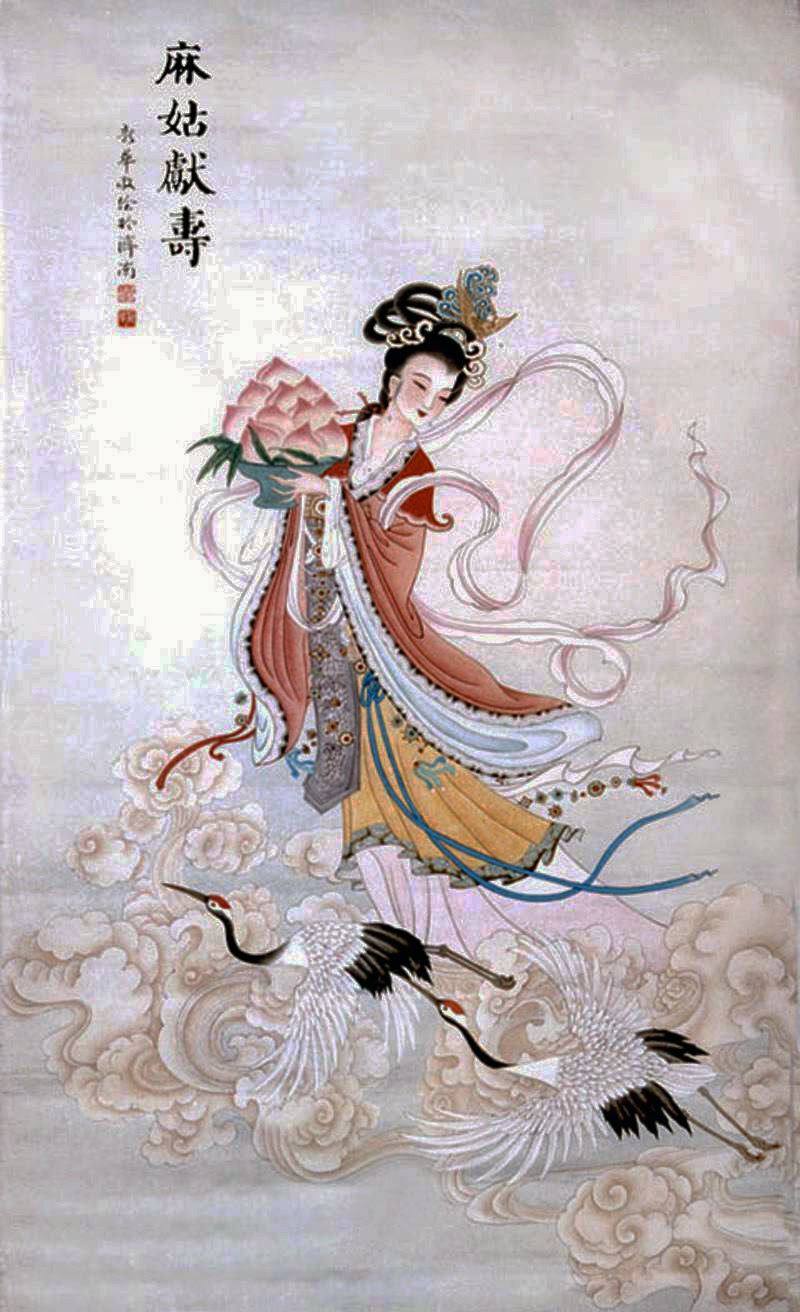 Magu’s name combines the Chinese character MA – which derives from a Zhou Dynasty ideograph showing plants drying in a shed – with GU, a kinship term for a woman also used in religious titles like Priestess. It’s been proposed that the name is related to the Old Persian word “magus” (magician, magi).

Ma Gu is often depicted flying on a crane, riding a deer or holding peaches or wine (symbols of longevity). She is associated with the elixir of life and is the protector of females. Before becoming immortal she freed slaves who were working for her evil father. She is often pictured on birthday cards in China, where cannabis has been continuously cultivated since Neolithic times, and the saying, "When you see a deer you know Ma Gu is near," is common. Magu Wine is made in Jianchang and Linchuan. Her harvest festival, when cannabis is traditionally gathered, celebrates the time “when the world was green.”

Magu is called Mago in Korea and Mako in Japan, where a saying “Magu scratches the itch” harkens to her long, crane-like fingernails. Several early folktales from Sichuan province associate Magu with caves, and one describes a shaman who invoked her. She is said to have ascended to immortality at Magu Shan ("Magu Mountain") in Nancheng. A second Magu Mountain is located in Jianchang county.

Magu was also goddess of Shandong's sacred Mount Tai, where cannabis "was supposed to be gathered on the seventh day of the seventh month," wrote Joseph Needham in Science and Civilization in China (1959). Needham wrote, “there is much reason for thinking that the ancient Taoists experimented systematically with hallucinogenic smokes…at all events the incense-burner remained the centre of changes and transformations….” The (ca. 570 CE) Daoist encyclopedia records that cannabis was added into ritual censers.

A modern Taoist sect called the Way of Infinite Harmony worships Magu and advocates for the religious use of cannabis (but its Wiki page was just deleted).
Posted by Tokin Woman at 10:17 PM