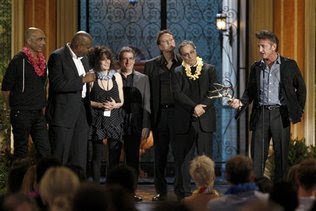 Fast Times At Ridgemont High director Amy Heckerling (the only woman in the picture at left) was in attendance to see her film inducted into Spike TV's "Guy Movie Hall of Fame" last night in Culver City, along with castmembers Sean Pean (in his memorable stoner role), Judge Reinhold and Forest Whitaker.

Ridgemont High is a cut above the average "stoner guy" or high school comedy; it's got heart, wit, and a finesse sorely lacking in the usual fare. Heckerling got noticed for the film and went on to write "Clueless" (1995) and the "Look Who's Talking" films, based on her experience as a mother. She pairs again with "Clueless" star Alicia Silverstone in this year's "Vamps," about Vampires in New York and their dating choices.

The female cast of the 1982 movie had better things to do that night. Jennifer Jason Leigh is busy winning raves on Broadway in The House of Blue Leaves with Ben Stiller and Edie Falco. And Phoebe Cates hasn't acted since she married Kevin Klein, had his kids, and opened a boutique in New York.

Also missing from the Spike festivities was Ridgemont High's author, Cameron Crowe ("Almost Famous") and Spicoli's stoner buddies Anthony Edwards and Eric Stoltz. Edwards will play Beat poet publisher Lawrence Ferlingetti in 2012's Big Sur, based on a novel by VIP Jack Kerouac. Whitaker, who played the jock in the film, is set to play Very Important Pothead Louis Armstrong in an upcoming biopic, which is said to include Louis's love of the herb in the script.

Mark Wahlberg, who earlier this year admitted he'd smoked pot but was now afraid to do so around his daughter, won the "Guy of the Year" award. Award winner Jim Carrey hasn't quite come clean, but discussing performing a bungee jumping stunt on TV's "Ellen" (12/17/2008), he said "I’m thinking, If there is a God, How do I explain that trip to Amsterdam when I was 19 and saying Yes to everything?"

The Guys Choice Awards, at which Keith Richards received recognition for his "brass balls", will air on Spike TV on Friday June 10 at 9 PM.
Posted by Tokin Woman at 11:44 PM

It's delightful to see your fine fan-leaf pulling so we can all take a look at how cannabis has infused our culture during the decades of its prohibition. We need to make its largely implicit impact on our cultural mores explicit. Your work takes us miles closer to or goal.