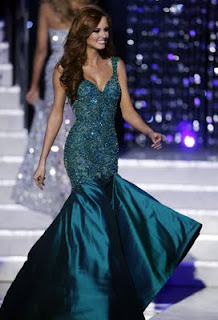 Alyssa Campanella, Miss California, was given points for her answer about medical marijuana on her way to being crowned Miss USA in Las Vegas on Sunday.

Real Housewife of New Jersey Caroline Manzo, one of the pageant's judges, asked Campanella her final question: "Many have argued that marijuana should be legalized and taxed to boost the economy and alleviate drug wars. Do you believe in legalizing medical marijuana? Why or why not?"

"Well, I understand why that question would be asked, especially with today's economy, but I also understand that medical marijuana is very important to help those who need it medically," Campanella replied.

"I'm not sure if it should be legalized, if it would really affect, with the drug war," she added. "I mean, it's abused today, unfortunately, so that's the only reason why I would kind of be a little bit against it, but medically it's OK."

Despite that rambling answer (proving perhaps she has a future in politics), Campanella is said to have impressed judges with her intelligence. One of only two contestants who said they believe in evolution, she is a self-proclaimed history geek who likes to watch The Tudors and Game of Thrones on TV. The stunning redhead chose emerald green for her evening gown and also shone in her metallic blue polka-dot bikini.

Campanella, a 21-year-old who was crowned Miss Teen New Jersey in 2007, will represent the US in the Miss Universe pageant in Sao Paulo, Brazil on Sept. 12.

UPDATE 2015: Lost in the flap about Steve Harvey crowing the wrong contestant was the fact that Miss Australia said marijuana is "amazing" at treating cancer.
Posted by Tokin Woman at 7:58 PM