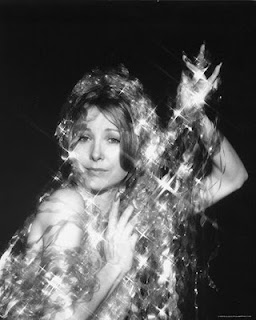 After blogging about Teri Garr’s final appearance on Friends (where marijuana is oh-so-briefly alluded to), I checked out Garr's autobiography Speedbumps: Flooring it Through Hollywood (2005). The book contains some unexpected revelations. First, when Garr was a young go-go dancer on TV shows like "Shindig!" and in movies like Pajama Party with Annette Funicello, she traveled to England and was invited to the recording studio while the Beatles recorded "Yellow Submarine." Seems a guy named Steve, the road manager for the Mamas and the Papas, put Garr and her friends up in a London flat. She writes:

We sat on plastic chairs outside the sound room and stared at them through a glass window. I thought I smelled pot….Eventually we went home but we saw them throughout the rest of our stay in London. The doorbell at our flat would ring, we’d look out the second-story window, and there would be George Harrison, wanting to know if anyone was home (Of course, it’s possible that they were more interested in seeing Steve than us. Steve kept some sort of chemistry set on the coffee table that the boys seemed to be very interested in. It contained sugar cubes and stuff. Wonder what that was about…?)…We returned to Los Angeles no wiser, but plenty cooler.

Garr hung out with fellow acting-school student and VIP Jack Nicholson, and appeared in his psychedelic movie Head (along with the Monkees and Funicello). Of Dennis Hopper, she writes, “This was my escape from showbiz—hanging out with this totally cool group of Venice beat artists and contemplating the meaning of life. The whole group was reckless, and Dennis was the ringleader. He took me and Toni [Basil] to love-ins and peace marches, and he was the only guy I knew who had the courage to drive his Corvair convertible (with the top down!) through a wall of flames during the Watts Riots. He may have been stoned at the time (who wasn’t)…" 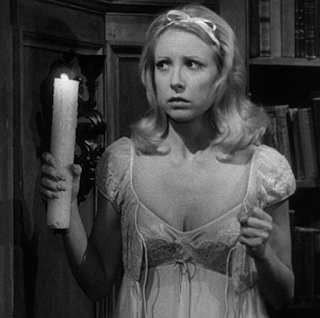 Soon Garr was onto success in films like Young Frankenstein, Oh, God! (with VIP John Denver) and Tootsie. After Carrie Fisher introduced her to her future novia, Dr. David Kipper, they went to Hawaii together so Garr could shoot a Pepsi commercial. She writes,

After my work was done, we went to stay in a fancy hotel on Maui. Biking to the beach, we passed a guy who offered to sell us pot. We rode past him nonchalantly, but once we got to the beach we changed our minds. I sent David back to buy a joint from him. The tabloids weren’t the unrelenting presence that they are today, but I still didn’t want to be recognized as a poster child for marijuana. So David rode back alone and bought a joint from the guy. But just as he was leaving the guy took another look at him and said, ‘Hey, you’re the guy who was with Teri Garr.’ So much for anonymity.

One very sad revelation in the book: Garr suffers from Multiple Sclerosis. That the former dancer has a disease that affects her motility seems a particularly cruel twist of fate. She was a spokesperson for Rebif, an interferon manufactured by the pharmaceutical company Serono, which has just paid $44.3 million in fines to “resolve” allegations by the DOJ that it paid health care providers to induce them to promote or prescribe Rebif. The kickbacks resulted in the submission of false claims to federal health care programs including Medicare and Medicaid.

It’s unknown whether or not Garr has tried cannabis for her MS. If she’s smoked throughout her life, it may well have delayed the onset of the disease, which she suspected she had for many years before finally being diagnosed. Dr. Dennis Petro, and others, have long maintained their studies show cannabis can retard and maybe even cure MS. See a review of studies on MS and cannabis.

I worked with the California Chapter of the Multiple Sclerosis Society to secure their endorsement for Proposition 215, the voter-approved measure that made medical marijuana legal in California in 1996. In 2009, the National MS Society came out with an Expert Opinion Paper saying, “There are sufficient data available to suggest that cannabinoids may have neuroprotective effects that studies in this area should be aggressively pursued…. Because inhaled smoked cannabis has more favorable pharmacokinetics than administration via oral or other routes, research should focus on the development of an inhaled mode of administration that gives results as close to smoked cannabis as possible.” The MS Society is funding cannabis research, summarized in their Summer 2011 newsletter. Multiple Sclerosis affects an estimated 400,000 Americans.

It’s rumored that Funicello, who also had MS, tried cannabis during her lifetime. Garr’s book mentions David Lander (Squiggy), who is an advocate for medical marijuana because of his MS. And of course you have probably read that VIP Montel Williams, another MS patient who has found benefit from medical marijuana, has opened a medical marijuana collective in Sacramento.

Maybe it's time for Garr to become a poster child for pot after all.

(If you don't get the title of this post, see the Rabelaisian explanation. )

UPDATE: The MS Society updated their position in 2014 when it said, "The Society is currently supporting a clinical trial of different forms of cannabis products. This study is designed to test the effectiveness in relieving spasticity in people with MS. Unfortunately, completion of this trial has been delayed due to challenges with recruiting patients able to adhere to the significant government requirements for trials using cannabis products. The Society is committed to funding additional research with cannabis products." A 2017 paper was less sanguine about cannabis's effectiveness, and lamented the difficulties in completing studies in the US.

On March 21, 2019, the Multiple Sclerosis Society of Canada announced a partnership with the Canadian Institutes of Health Research to fund research into using cannabis for treating symptoms of MS, and the general effects of cannabis on MS patients.
Posted by Tokin Woman at 7:54 PM