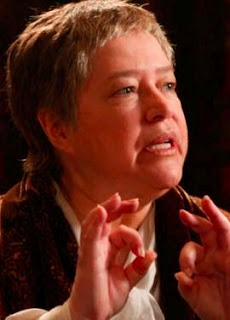 Highly Recommended: Woody Allen's new film, "Midnight in Paris," wherein Owen Wilson's character Gil Bender travels back in time to meet the likes of Scott & Zelda Fitzgerald, Ernest Hemingway and Pablo Picasso. For those, like me, who'd like to return to another time, this film is a magnificent journey, with a lovely lesson about living in the present.

When the would-be novelist Gil goes to Gertrude Stein's (a pitch-perfect Kathy Bates, pictured above) the door is opened for him by Alice B. Toklas, she of the brownie fame. (Actually her brownies were more of a majoon, and the recipe was contributed by Brion Gysin.) It's unknown whether or not Gertrude ate them, but the two did influence VIP Paul Bowles.

When Gil tries to explain his fantastic adventures to his fiancee Inez (Rachel McAdams), she asks him, "What have you been smoking?" Gil may be named for Gilgamesh, mankind's original hero whose fear of death lead him to seek immortality in a magic plant.

Mentioned in the film as the first lover of the composite character Adriana is VIP Amedo Modigliani. Adriana could be based on Beatrice Hastings, the pen name of Emily Alice Haigh (1879-1943) who lived with Modigliani as his mistress, and reportedly shared his indulgence in hashish. Hastings was a journalist, a poetess, a circus artist, and a follower of Helena Blavatsky. 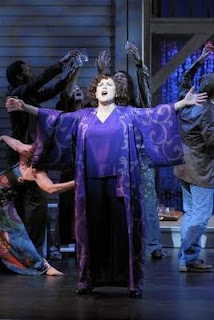 Also spotted: a musical version of Armistead Maupin's beloved stories of San Francisco, Tales of the City, now having its world premiere at SF's American Conservatory Theater. Here are some reviews of the show:

This musical is an enjoyable three-hour "celebration of sex, drugs, and all kinds of coming out" ...Absolutely nothing should be changed about Judy Kaye's turn as Mrs. Madrigal [pictured right], "the bohemian goddess-cum-landlady" who floats around in psychedelic robes and dispenses "sage bits of weed-infused wisdom" along with her strangely addictive brownies...this "Age of Aquarius flashback deserves to be seen on a Broadway stage." --The Week, June 17, 2011

"Exuberantly captures the sweeping current of transformation in Maupin's work . . . a happy blur of flares, gay saunas, and bongs." —The Guardian (UK)

"Whether you are a Mona or a Mary Ann, a Mouse or a Mrs. Madrigal, this show illuminates the colorful, crazy, complicated, wild times of our fabulous city. A gift to San Francisco and all of us who love it!" —Jan Wahl, KCBS/KRON-TV
Posted by Tokin Woman at 11:15 AM