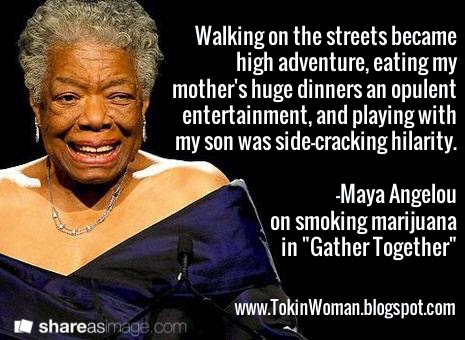 Revered author Maya Angelou, the first poet since Robert Frost to read a poem at a Presidential inauguration, wrote about her experiences with marijuana in Gather Together in My Name, the second installment of her autobiography after the acclaimed I Know Why the Caged Bird Sings.

Angelou, who started life as Rita Johnson from Stamps, Arkansas, was raped at the age of 7, and had an illegitimate child in her teens. Working as a waitress to support her son in San Diego, 18-year-old Rita met two lesbian prostitutes who frequented the bar where she worked. One night, the women invited her to their house for dinner. Angelou recounts:

"Let's have a little grifa before dinner." Johnnie Mae gave an order, not an invitation. She turned to me.
"You like grifa?"
"Yes. I smoke." The truth was I had smoked cigarettes for over a year, but never marijuana....I was prepared to refuse anything else they offered me, so I didn't feel I could very well refuse the pot....

I inhaled the smoke as casually as if the small brown cigarette I held were the conventional commercial kind.
"No. No. Don't waste the grifa. Hand it here....try it like this..."
I opened my throat and kept my tongue flat so that the smoke found no obstacle in its passage from my lips to my throat....

The food was the best I'd ever tasted. Every morsel was an experience of sheer delight. I lost myself in a haze of sensual pleasure, enjoying not only the tastes but the feel of the food in my mouth, the smells, and the sound of my jaws chewing.

"She's got a buzz. That's her third helping."

...I decided to dance for my hostesses. The music dipped and swayed, pulling and pushing. I let my body rest on the sound and turned and bowed in the tiny room. The shapes and forms melted until I felt I was in a charcoal sketch, or a sepia watercolor. (pp. 52-55)

By the end of the evening Rita had arranged to rent the women's house, putting them to work for her as prostitutes, with her barganing for their services with cab drivers and taking a cut. Meanwhile, she read Dostoevsky and studied dance. Soon the arrangement turned sour and she had to flee back to Stamps, where drinking Sloe gin "numbed my brain" and she had to make herself sick to get rid of the poison.

Rita went back to the West Coast and tried joining the Army in San Francisco, but was turned down because the The California Labor school, where she'd studied dance and drama, was deemed a Communist organization. So she started waitressing again, and smoking pot.

Smoking grass eased the strain for me. I made a connection at a restaurant nearby. People called it Mary Jane, hash, grass, gauge, weed, pot, and I had absolutely no fear of using it. In the black ghetto of the forties, marijuana, cocaine, hop (opium) and heroin were only a little harder to obtain than rationed whiskey. Although my mother didn't use anything but Scotch (Black & White), she often sang a song popular in the thirties that at its worst didn't condemn grass, and at its best extolled its virtues.

"Dream about a reefer five foot long
Vitamin [sic] but not too strong
You'll be high but not for long
If you're a viper..."

I learned new postures and developed new dreams. From a natural stiffness I melted into a grinning tolerance. Walking on the streets became high adventure, eating my mother's huge dinners an opulent entertainment, and playing with my son was side-cracking hilarity. For the first time, life amused me. ...

I disciplined myself. One joint on Sunday and one on the morning of my day off. The weed always had an intense and immediate effect. Before the cigarette was smoked down to roach length, I had to smother my giggles. Just to see the falling folds of the curtains or the sway of a chair was enough to bring me to audible laughter. After an hour the hysteria of the high would abate and I could trust myself in public. (p. 154).

After a brief stint dancing professionally, she met a married man who told her her, "It's gauge that's breaking my marriage....My silly dilly wife stopped letting me have any and she goes around laughing and giggling all the time." She flushed her pot for him and soon let him lead her into prostitution herself, where she was told if she was good she'd be given some "white girl" (cocaine) but, "They won't let you smoke hemp, though. They say it makes a 'ho too frisky. 'Hos get their heads bad and forget about tending to business."

At the close of the book, another man named Troubador shows her how he shot heroin, and makes her promise to keep her innocence. He gives her his clothes to sell so that she can escape and head back to her Mother's house.

In the following autobiographical installment, Singin' and Swingin' and Gettin' Merry Like Christmas, Rita is discovered while dancing at a strip club in San Francisco and develops a Calypso singing act, changing her name and eventually finding her way to activism with Martin Luther King and Malcolm X, as well as writing with the encouragement of James Baldwin and others.

Maya Angelou received over 50 honorary degrees and three Grammys. She was awarded the Presidential Medal of Arts in 2000 and the Lincoln Medal in 2008.

PS: During the outpouring of tributes from everyone, including President Obama, after Angelou's death, I learned that she was the first African-American woman to operate a cable car in San Francisco (in her teens!) Cable cars use hemp fiber in the center of their steel cables. Another cannabis connection.

PPS: Angelou isn't the only revered US poet to sing the praises of pot. In his book of Haiku She Was Just 17, former poet laureate (2001-2003) Billy Collins wrote:

So many nicknames for you
But none as lovely as
marijuana

may i have permission to reprint this on kiefair.com with credit given to you as the author and links back to your blog?

the post we spoke about is up now.
http://kiefair.com/2014/05/28/rip-maya-angelou-honoring-her-cannabis-connections/