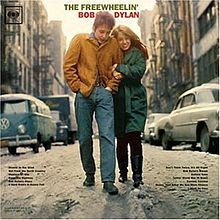 Yesterday, Terry Gross aired an interview she'd done on Fresh Air with Suze Rotolo, the woman who appeared arm-in-arm with Bob Dylan on the cover of his 1963 album "Freewheelin' with Bob Dylan."

Rotolo lived with Dylan for four years and is credited in his autobiography with influencing his life, activism and art. "Meeting her was like stepping into the Tales of 1001 Arabian Nights," he wrote. She inspired his songs “Don’t Think Twice, It’s All Right,” “Boots of Spanish Leather,” “One Too Many Mornings” and “Tomorrow Is a Long Time.”

According to the New York Times, Rotolo lived in downtown New York her entire life, and worked as a teacher, a painter and a book illustrator.

In her memoir A Freewheelin' Time, Rotolo writes, "I swear it was [Canadian folk musician] Ian Tyson who offered up the first taste of marijuana when Bob brought him to the flat one afternoon. Ian had a friend back home who had introduced him to their stuff you could smoke that would get you high. Bob didn't think I should try it until he had tested it, but later on I did."  Writing about sitting around with Tyson and his partner Sylvia listening to records, Rotolo wrote, "We reveled in the joy of discovering something we had never heard before. And this wasn't just for music; it was about books and movies, too. We were a young and curious lot, but we all acted cool and hip and knowing."

After someone dosed her drink with LSD without her knowledge, on a night when she had "smoked and drank some but not excessively," Rotolo never voluntarily tried acid. She wrote, "In the folk music world in the early days, it was a slow lope into marijuana use, and drug use in general. Booze was still it with the older crowd, and we were emulating them, but eventually drugs got equal billing. By the time the next group of Village explorers came on the scene, booze was on the way out, particularly with anyone who had been to college."

Rotolo signs off her book with the words, "We had something to say, not something to sell." In 2004, using the pseudonym Alla DaPie, she joined the street-theater group Billionaires for Bush and protested at the Republican convention in Manhattan.

Suze Rotolo died last week at the age of 67.
Posted by Tokin Woman at 8:40 PM

fyi: Diamond Dave Whitaker
http://www.facebook.com/profile.php?id=594218223
first turned Bob Dylan on to pot.
Bonnie Beecher (Jahanara Romney, who married Wavy Gravy) and Dave were high school friends in Minnesota, and she brought fellow Minnesotan Bob Dylan to meet Dave in 1961, before he went to New York, and they smoked pot mucho then.