Seemingly tireless consumer rights crusader Ralph Nader spoke on July 30 to a packed, appreciative house at the First Congregational Church in Berkeley that gave him three standing ovations. At the age of 80, Nader is showing no signs of slowing down, having appeared earlier in the day at a protest to save the Berkeley post office building from the rapacious clutches of Sen. Dianne Feinstein's developer husband.

Nader's new book Unstoppable: The Emerging Left-Right Alliance to Dismantle the Corporate State advocates for finding common ground between groups on issues, despite differing ideologies on others. It's a strategy that's worked for him in the past, starting with the "strange bedfellows" coalition of environmentalists and fiscal conservatives that halted Tennessee's Clinch River Breeder Reactor in 1982.

Opening with the Aldous Huxley quote, "Facts do not cease to exist because they are ignored," Nader said we must smash the myths that control us and end the "divide and rule" strategy.  He argues for hiring full-time advocates to lead the charge, starting with auditing the defense department, ending corporate bailouts, tying the minimum wage to inflation, breaking up big banks, and reining in the "electronic child molesters" who bombard children with commercialized TV.

"It all starts with the quality of citizenry," he said, adding, "It's all about self respect and sharing credit. Seeking justice is a major source of human gratification." He noted the email campaign that halted a potential war with Syria as an example of the power of citizen action. He pointed to Eric Cantor's stunning defeat, despite being outspent by 27:1, and said the Koch brothers are losing in their push for a surtax for solar panels. "Money doesn't vote," he reminded the crowd, urging them to get out and knock on doors to get out the vote. "It's called work," he said. 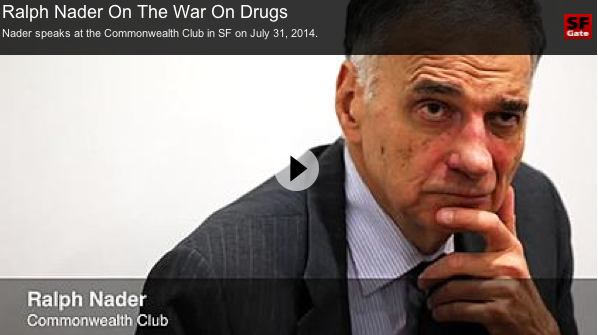 Nader notes that both the left and the right have been critiquing the War on Drugs for years, from William F. Buckley, Jr. and Milton Friedman to Kurt Schmoke and Kevin Zeese. "The classification and prosecution of drug use as a crime has activated and corrupted law enforcement, encouraged a truly self-defeating form of big government, endangered urban neighborhoods and many thousands of lives, and drained billions of dollars a year from taxpayers," he writes. He notes that many of the reforms recently proposed by AG Eric Holder are similar to those enacted by Texas Governor Rick Perry, and that a dozen Democrats and Republicans joined forces on a bill to legalize the growing of industrial hemp in Congress.

Nader mentioned in his talk that 15 states have passed juvenile justice reforms with left-right support. That day, Rand Paul and Corey Booker introduced such reforms at the federal level, citing drug war issues. Nader said concern for our children is a unifying issue; 80 organizations have now called for an end to the drug war in order to protect children.

Ralph Nader is a big reason I'm an activist today, and  I got to meet him once, at a party at Tony Serra's law office. Prompted by CalNORML director Dale Gieringer to ask whether or not he favored marijuana legalization, Nader responded, "Not legalization. Regulation."

NORML founder Keith Stroup writes in his new book that he worked for Nader and partied with Nader's Raiders back in the day.
Posted by Tokin Woman at 8:59 AM