Why Take Marijuana (or Alcohol)? Researchers Want to Know 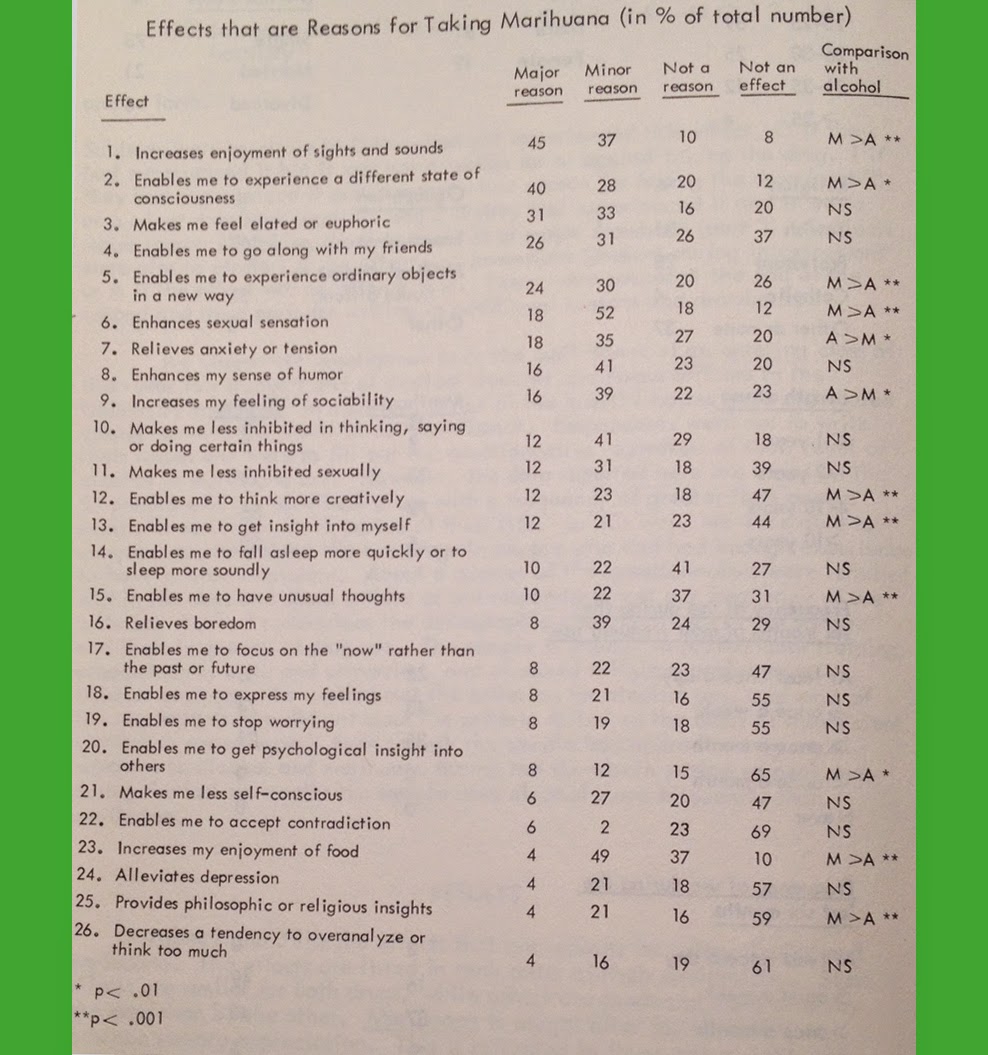 Maybe I'm just trying to make up for the bikini shot I posted last night (hey, it had pot leaves on it!) but I spent my Friday night wonkily reading results from some interesting research published in 1976, when marijuana was still spelled with an "h" (see above).

Researchers from Stanford University and the Veteran's Administration in Palo Alto put 220-item questionnaires into the mailboxes of an entering class of first-year law students and of medical students and house officers at the University hospital. The questionnaire asked respondents to rate each of 38 possible effects of marijuana or alcohol as a major reason to take it, a minor reason, not a reason, or having no effect. Forms were returned anonymously. The data gathered are based on the 51 respondents who used both marijuana and alcohol with a frequency of greater than once a month for some six-month period of their life.

Coming in at #2 for alcohol was “relieves anxiety or tension,” something not attributed to marijuana as a reason for use. For marijuana, “enables me to experience a different state of consciousness” was the #2 reason; for alcohol that was #6. “Makes me feel euphoric” earned large enough percentages to rank #3 on both lists.

The research was supported by a National Institute for Mental Health grant and the VA administration. It found that marijuana had several effects like, “enables me to think more creatively,” “enables me to get insight into myself,” and “provides philosophic or religious insights” which weren’t attributed to alcohol. "Marihuana is valued as a drug for experiencing and thinking about things in a new way," the authors wrote. "Since much of psychotherapy is based on helping people to achieve new perspectives and insights, marihuana might be considered as an aid for psychological problem solving and growth."

While 17% of respondents said alcohol “makes me feel more attractive to others,” only 26% said alcohol “enhances sexual sensation” while 70% said marijuana did (as a major or minor reason). "When performance anxiety leads to male impotence or female frigidity, marihuana might enhance sexual sensation, permitting enough success to break out of the vicious circle of failure leading to anxiety leading to further failure." Take that, Viagra. (No bikini required.)

Supported by a NIMH grant and the VA administration.