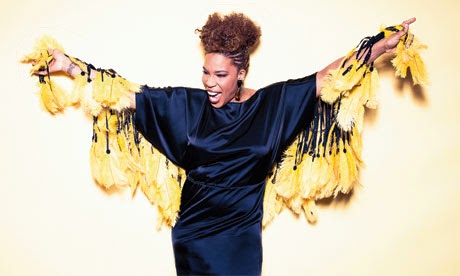 Macy Gray has brought her distinctive voice and style to a new single, "Stoned," now available on iTunes, from her forthcoming album "The Way."

Born Natalie McIntyre in September 1970 in Canton, Ohio, the 6-foot-tall black girl didn't fit in with her mainly white classmates at her Ohio prep school. She moved to Los Angeles and was a mother of three with a rocky marriage when she catapulted to fame on the strength of songs like "I Try," for which she won the Best Female Pop Vocal Grammy in 2001.

The singer admittedly didn't handle her fame well, indulging in excesses but denying rumors she used hard drugs. She told one interviewer that drugs play an important part in her creativity. "I think everybody needs a little oblivion. It is important to get out of your mind sometimes so you meet a different side of yourself. I have had some really incredible revelations on drugs but at the same time they can do horrible things to you, like make you have to spend a lot of money on rehab."

The "Stoned" video shows Gray smoking and giggling while looking at online pictures of other famous stoners, including Tokin Women Miley Cyrus, Martha Stewart, Marilyn Monroe, Maya Angelou, Oprah Winfrey, Lady Gaga and Rhianna. And it looks like she's seen VeryImportantPotheads.com because the video picks up the Bob Marley and Bill Gates photos from their pages there:


Gray has been diagnosed as bipolar, a condition for which many report relief from cannabis, although studies show mixed results. A 2012 study found marijuana can improve cognitive functioning in those with bipolar disorders.

Gray covered The Toyes song "Smoke Two Joints" in 2012. In 2013 she was named in a lawsuit filed in Los Angeles Superior Court by a security guard from Universal, alleging rampant marijuana use at the company's headquarters.

Starring recently in The Paperboy (2012) with Zac Efron, Matthew McConaughey and Nicole Kidman, Gray also has a successful acting career. In Little Lake for first-time filmmaker Jasmin Sharon, she plays a "hippie psychic" who assists a young girl's coming of age.

Gray is touring in California starting at the end of August, then nationwide. Read more.

CelebStoner names Gray's "Stoned" video in its Top 10 Stoner Songs of All Time.
Posted by Tokin Woman at 10:05 PM